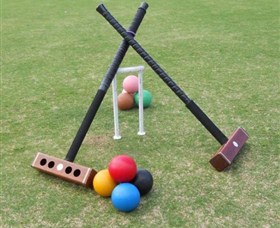 Croquet in the Victoria Area received high recognition from Croquet Canada at its 2018 AGM on November 24.

This year’s Blue (top) Division Club of the Year in Association Croquet was the Canadian Pacific Lawn Bowling Club, with Chris Percival-Smith, Michael Dowling, and Pierre Dunn competing. The Club of the Year is the club whose members amass the most points by playing in tournaments sanctioned around the world.

This year’s Red (second) Division Player of the Year in Association Croquet was Lorne Oakes of the Victoria Lawn Bowling Club. Lorne beat out other players in his division from all across the country.

And Pierre Dunn was awarded the Derrick Robinson Award for 2018. This award, created in 2009, is intended to “recognize the Croquet Canada member who, during a particular year, contributed most to the growth and development of croquet in Canada.” Pierre is eager to point out that whatever he’s done for croquet has only worked because so many other people have responded so enthusiastically to the options he’s been supporting. “We’ve made a good start, working and playing together,” he says, “but we have to keep the balls rolling.”

Many thanks to both clubs for the support the croquet players have received!