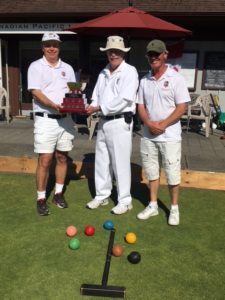 Chris Percival-Smith (L) of CPLBC receives the Hal Sisson trophy from Pierre (C) while Michael Dowling (R), also of CPLBC, thinks about what could have been. 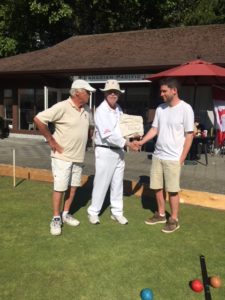 Pierre Dunn presents a beautifully gift-wrapped plate to Plate winner Conor Broderick as the other Plate finalist, Peter Rassenti of VLBC, looks on.

Michael Dowling took on all eight available opponents in the Victoria Day Association Croquet Tournament’s opening round robin, and defeated every one. One of those opponents, however, lost only to Michael, and that opponent, Chris Percival-Smith, roared back in the playoff finals to get sweet revenge with a 26tp victory. The win earned Chris the Hal Sisson trophy and dropped Michael into second place overall.

Chris and Michael, both from the Canadian Pacific Lawn Bowling Club, both rose in the international ranking system as a result of the event. Chris’s rise lifted him in the point system, but didn’t shift him up from his already solid ranking as #2 in Canada. Michael’s fine play popped him up to #8 in Canada.

Other players’ Canadian rankings ended as follows: Brian Wasylyk at #11, Pierre Dunn at #13, Russell Uhler at #16, and Peter Rassenti at #26. Conor Broderick, a newcomer to Canadian croquet, ended at #7 in Canada. A recent immigrant from Ireland to North Vancouver, Conor was playing for the first time in seven years, and the rust was clearly visible. Even so, he took away the Plate, beating Peter in the Plate final. We look forward to Conor’s continued contribution to British Columbian croquet, not only as a player but also as a mentor and an organizer. When he can spare a bit of time from his young family and his new medical career, of course!

The Victoria Day Tournament itself was another successful, well-received event run under the combined sponsorship of the Canadian Pacific and Victoria Lawn Bowling Clubs. The competition used CP’s only lawn and one of Victoria’s two, and the VLBC responded by opening their second lawn to the displaced CP bowlers for combined bowling. We’re not only about competition, but about mutual support.

And speaking of mutual support, the non-playing members of the two clubs’ croquet communities, and several of the bowlers as well, contributed very helpfully to the logistical efforts making sure that the tournament ran well. Of particular note was Donna del Torres’ management of the catering aspect of the event, making sure that lovely breakfasts, lunches, and even a tournament dinner were available to keep the players going. She received a lot of very capable and welcome assistance at both clubs, for which the players were very grateful. Volunteers included Peter Gilchrist at the BBQ grill for the opening night feed, Anne Boldt, Caroline Mitchell, Libby Weiser, Rosemary Verre-Delbridge, Bonnie Vivier, Becky and Bob Vander Steen, Kathy Moi, Rose Westcott, Bob Towler, and Steffen Preusser. Thanks also to Michael, Chris, and Brian for laying out the lawns. Chris served as tournament referee, with Michael, Brian, and Pierre as stand-ins when he was at a different venue.
Thank you, everyone! And thank you to the provider of the excellent weather all three days.

The total expenses for the event have not yet been added up, but they are more than covered by the entry fees, and the profit will be split between the two sponsoring clubs to help support ongoing programs.