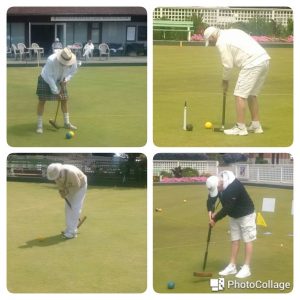 Many thanks to the 12 entrants in this past weekend’s Victoria Day tournament.  Everyone played well, and everyone found reason to improve, and what more can you hope for?

Visitors to our Club for this event were Brian Wasylyk of Campbell River, John and Jan Westwater from Seattle, and Wally Clark of Portland.  We look forward to seeing them all again.

All 12 entrants participated in the Golf Croquet competition.  Kathryn Cambridge and I managed to climb out on top after the melee, and will get our names on the permanent cup.  Brian Wasylyk and Hilary Coupland hammered their way into second place, and walked away with handsome engraved wine glasses, but will have to supply their own wine.  The other teams competing were Chris Percival-Smith and Jan Westwater, Wally Clark and Keir Cordner, Michael Dowling and Mike Holt, and Peter Rassenti and John Westwater.

The 10 players in Association Croquet went through two rounds of competition.  After the first day’s round robin, Michael and Peter led the field with four wins out of four games — a sweep!  Brian and Keir came in second with two wins and a tie, Chris and Kathryn followed with a win and two ties, and Pierre and Mike managed one win and one tie.  Wally and John put up a succession of valiant struggles before succumbing in all four of their games.

In the final ladder on Monday, Pierre and Mike defeated Wally and John to move into a semifinal with Michael and Peter, where they stunned the crowds with a decisive win.  The other semi-final saw Chris and Kathryn take down Brian and Keir with very steady play.  In the final, Pierre and Mike struggled to make any progress at all, while Chris and Kathryn strode around the court from hoop to hoop in very no-nonsense fashion, taking the win very handily.  Kathryn’s steady, consistent play throughout the tournament earned positive comments from many players, leading to her being acclaimed Player of the Tournament at the awards ceremony.